On how to give a protagonist attitude: Raymond Chandler writes it into Marlowe’s interior monologue at the beginning of “The Big Sleep”. 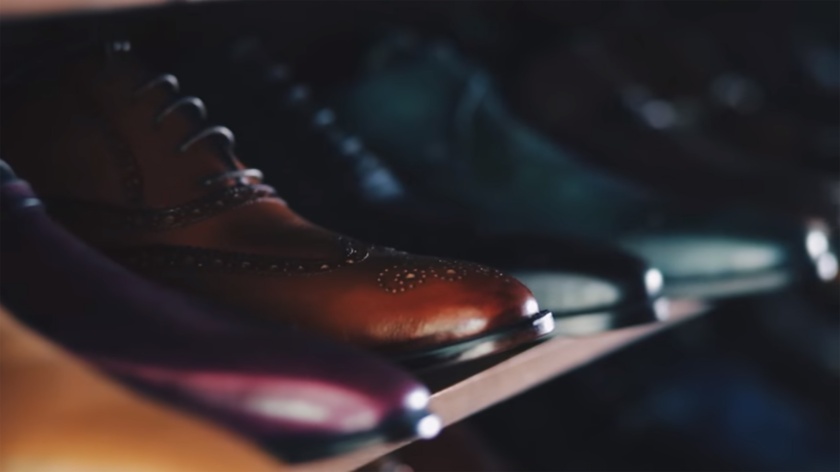 Exceptions abound, as exceptions do—but not in today’s Quote.

The opening sentence of Raymond Chandler‘s novel The Big Sleep (the book that introduces his protagonist, private detective Philip Marlowe), concerns the time of day, the month, and the weather.

It was about eleven o’clock in the morning, mid October, with the sun not shining and a look of hard wet rain in the clearness of the foothills.

We cut him some slack, because it was 1939, and you were still allowed to start a page-turning crime novel with the weather and skip the action for a whole 140+4 characters; even today’s readers can get as far as the length of a tweet and still be interested in the text that’s on the accompanying picture. (Also, according to The Guardian, that first line could have been one of Fitzgerald’s, so that’s alright.) The next few sentences of The Big Sleep are given in the Quote.

Quote: I was wearing my powder-blue suit, with dark blue shirt, tie and display handkerchief, black brogues, black wool socks with dark blue clocks on them. I was neat, clean, shaved and sober, and I didn’t care who knew it. I was everything the well dressed private detective ought to be. I was calling on four million dollars.

Most good books will start touting their wares as soon as possible, if not in the first line and not in an obvious fashion, then soon and subtly. Which part of the Quote caught your attention?

The first official “hook” of the book is delivered in the last sentence of the Quote: Marlowe isn’t visiting some average nobody, but a wealthy client; and wealth usually means perverse crime and nail-biting intrigue in this genre. But it’s the unofficial “hook” of an earlier sentence, in the form of and I didn’t care who knew it, that signals his attitude and the reason the book isn’t just another potboiler.

The clause and I didn’t care who knew it seems like a flippant, spur-of-the-moment throwaway comment appended onto an otherwise carefully prepared list. Of course, it’s anything but; it’s the climax of the list and the counterbalance to such overall neatness. Without it, you’d think him only a dandy, not a hard-boiled detective.

To achieve a sense of climax, you need a progression of at least two increments: that is why after the base level is established with the list of clothing and the neat, clean, shaved, there comes the sober; it says something new (that sobriety is not necessarily his default state), and prepares us for another step up, to his attitude. Not caring who knows it means anyone and everyone and no one in particular can know it; it shows that you’re not ashamed of your current state, and that you’re perhaps a little chuffed about it too. Yet there is precisely one person Marlowe is trying to make sure appreciates his efforts: the client.

Auxesis is a climactic ordering; an arrangement of clauses intended to achieve a gradual increase in intensity of meaning. Usually it’s an obvious listing one-two-three (e.g. It’s a bird. It’s a plane. It’s Superman!), but sometimes it’s more subtle—clothing, sobriety, attitude—like above.

Occultatio or paralipsis emphasises a statement by explicitly claiming to pass over it. I demonstrated an application in How to: Form Opinions (Responsibly), where I brought attention to an issue by posing a question I wasn’t going to answer. However, occultatio usually occurs in the form that General Sternwood, Marlowe’s rich client, uses in the first chapter (emphasis is mine):

“I need not add that a man who indulges in parenthood for the first time at the age of fifty-four deserves all he gets.”

If he need not add, then why add it? The same goes for Marlowe’s statement: if he didn’t care who knew it, then why say so? Marlowe’s words also allow for a meta-reading (perhaps the only kind of reading, in this case): his words are his internal monologue, they are not directed at anyone within the reality of the book, therefore he is essentially saying: Oi, you, Reader! Pay attention, this is important, this will tell you who I am.

Alternatively, it’s Chandler saying: Oi, you, Reader! Pay attention, this character is worth your time as is this book. In which case, my interview metaphor should be modified: if the back-cover blurb is the CV, then the opening lines of a book are the opening lines of a pushy parent trying to get their grownup child hired.

But I don’t recommend you think like that: save your cynicism for the (fake) news.

4 thoughts on “No One Knows About the Dark Blue Clocks”