How to unpack such a sentence? Try.

If you had a slightly vertiginous, confusing, yet ultimately not unsatisfactory experience figuring out three compound adjectives and two compound nouns, as well as, that Anne Carson is a poet, G is the name of (presumably) a person, Io is the name of a musk-ox, and that an angle bracket at the end of a book title is not an impossible concept … Excellent! You now have an inkling what it’s like to read Carson’s verse in general.

Of course, she does it better, and for longer, and without resorting to hyphens at every turn to compactify her images.

Quote:
Blood still
buzzing with gorse she
does not hesitate to
believe that a masterpiece
like herself can fly.
Should fly. Does fly.

She in the Quote is Io the musk-ox.

I already wrote about Carson’s Autobiography of Red (1998), which is also a verse-novel, albeit of different appearance and feel. It follows the childhood and early years of Geryon, a boy with red wings; it is written in free verse, alternating visually between long and short lines on the page, and it reads like a dense, lyrical, unconventional novel—like a novelisation of poetry.

Red Doc>, published fifteen years later, returns to follow a middle-aged Geryon, now referred to as G. It’s a connected sequence of free verse poems contained within two-inch columns, justified on both sides, and it unfurls down the middle of the page like the chatters marks of a glacier or like the clusters of aa lava.

Speaking of which: glaciers and lava, flying red-winged monsters and oxen, love and army, hospitals and Ancient Greece—expect to find them all within the pages of Red Doc>. Bizarre can be beautiful, and meaningful. Carson ensures it. 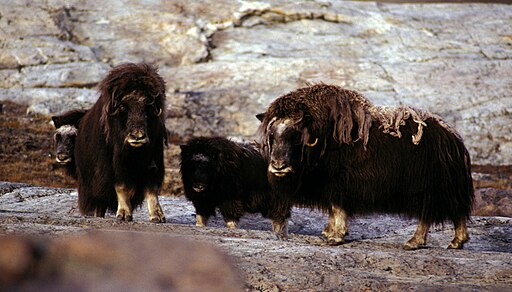 You mustn’t challenge what your eyes tell you is on the page, but you must continually challenge what your mind says you should understand. Time jumps, associations clasp each other like hands, letting go and latching on in different permutations. Sometimes the hand is a foot or a hoof. And sometimes there’s a sprinkling of names that carry the weight of myth, and that the reader ought to know about. (For example by reading Ovid’s Metamorphoses, which I discuss here.)

Indeed, the Note about the author at the end of the book says only this: Anne Carson was born in Canada and teaches Ancient Greek for a living.

So let’s start there (not in Canada). Let’s start with Io.

Io was a nymph raped by the thunder-god Zeus. When Hera, his wife, became suspicious of his extramarital activities, Zeus quickly turned Io into a lovely white heifer. Hera, still unconvinced, requested Zeus give her the heifer as a present—he couldn’t refuse. And so on and so on. But even this much is sufficient context to begin with.

I knew little, I admit, prior to reading Red Doc>. So I started with the basics: appearance, location, biology, linguistics.

Each head / has two horns that part as / neatly as a boy about to / play the piano wets his / hair and hopes it stays flat / for the whole recital.

Location. Arctic circle (this is where Canada comes in). It’s cold:

Where two cloven halves of / her hooves clocked in ice / and blood crippling along / arteries at minus twenty- / three degrees is a glory to / her. Winter exists and / winter is never soon / enough.

Biology. They’re of the genus ovibos, meaning sheep-ox, although they are closer to sheep than to oxen.

Don’t let’s forget the gorse from the Quote. Of the prettiest yellow, clustering like grapes would, if grapes were butterflies, surrounded by thorns, chewed on by hardy, winter animals, high in protein, made into salads for humans, made into fruit wine also for humans. Therefore, edible and intoxicating.

The gorse smells / interesting. She bites off / some and stands a while / working it against her / mostly toothless upper jaw. / Especially pungent this / gorse. It is half-fermented / and will cause her mild hallucinations all the rest of / the day. Or perhaps not so / mild.

She, again, Io. This explains why Io decides she ought to be able to fly. She’s a little drunk.

What is a the core of the quote?

Before today, I’ve written about personified fog and fox, rose and pump and armchair, and fairy godmother History.

The closest perhaps would be Tolkien’s fox, who speaks and thinks in first person for a paragraph. However, Carson’s musk-ox is a recurring character whose thoughts are reported, admittedly, in third person (the intimate, mind-reading kind), but who is a complex character in her own right, fully enmeshed with the other humans, monsters, gods that appear in the book. From the Quote—and Io has far more lines than the ones I cited—we conclude that she hesitates and believes, and that she is haughty. What’s more, from the few lines that follow the Quote, Without a sound and by / the time M’hek turns / around she is aloft, we see she even acts on her hallucination. She actually hurls herself off a cliff and into an oncoming wave of lava believing she can fly.

While airborne, she is even given a few scientific thoughts:

Falling is a fact.
Soaring not a fact.

Io does fly, but I won’t spoil it for you, and say what that means. What I will say is serious, if phrased tongue-in-cheek: when intoxicated, do not form beliefs and then act on them—unless you’re a musk-ox in Anne Carson’s novel. I think that covers most of us.