A guide to the symbols in Borges’s story “There are more things”.

Borges is a master forger of the complex connection. But it is only complex because the elements he brings together are sufficiently disparate that few people understand them immediately. As he himself says: In order truly to see a thing, one must first understand it.

Therefore, to truly see the complexity of his stories, you first must understand its elements, which often come in the form of proper nouns. With one word he quotes a whole body of work.

This is the most distilled form of testimony and of context creation. Borges is known for brevity.

Today’s post is symbol and sign-guide to Borges’s eight-page story There are more things from the collection The Book of Sand (1975). Think of it as a treasure hunt, where there’s no point claiming that you’ve followed the trail until you know what most of the the names mean. Some critics label this particular story’s climax as truly spine-chilling, only to accuse Borges of wasting words beforehand. But a climax makes no sense if there is no build-up, and a build-up only makes sense if you understand its symbols. And the symbols are truly—

Well, judge for yourself.

The story revolves around a Red House in Lomas. Lomas refers to Lomas de Zamora, a province of Buenos Aires—a clue that seems to have thrown off even the diligent authors of the wikipedia page detailing this story as to the potential meaning of Red House. Indeed, buried in the middle of the story, there is a line comparing Red House to another one: both houses conformed to the solid rules of the good poet and bad builder William Morris. Aha! William Morris designed one Red House in Bexleyheath, Southeast London, a perfect setting for a grotesque Lovecraftian story. (It is now owned by the National Trust and open to visitors—so go visit if you can!)

The story opens with a few offhand philosophical remarks regarding the protagonist’s upbringing by a recently deceased uncle and erstwhile owner of Red House. (All quotes taken from a translation by Andrew Hurley.)

One of the dessert oranges was the tool he employed for initiating me into Berkeleyan idealism; he used the chessboard to explain the Eleatic paradoxes.

The basics of Berkeleyan ontology assert that physical objects are collections of ideas, which in turn derive from our physical senses. So an orange would be a collection of the visual ideas of orange colour and light-play on puckered skin, the olfactory ideas of orange smell, the gustatory ideas of … Why bring in philosophy? Because the story is about perceiving the impossible, perceiving a monster of a monster, and the (possibly poor) tools which we have for doing so. Indeed, let me expand the quote with which I started the post:

Let me explain: In order truly to see a thing, one must first understand it. An armchair implies the human body, its joints and members; scissors, the act of cutting. What can be told from a lamp, or an automobile? The savage cannot really perceive the missionary’s Bible; the passenger does not see the same ship’s rigging as the crew. If we truly saw the universe, perhaps we would understand it.

(When put like this, it is not strange for Banville to personify armchairs.)

The Eleatic paradoxes refer to the paradoxes of Zeno of Elea that consider motion and time discretely and essentially deny the existence of converging infinities (e.g. Achilles and the Tortoise and the Arrow paradox). The paradoxical nature of time, space, and infinity is again a central theme of the story.

Then there’s a reference to the fourth dimension: [the uncle] was interested in Hinton’s fallacious cubes.

Charles Howard Hinton (1853–1907) was a British mathematician known for his interest in the fourth dimension and for coining the word tesseract. In his 1904 book called The Fourth Dimension he starts off by taking Plato’s shadow world literally, and asks himself what if the fourth dimension contained the human soul, whose projection into our three-dimensional body created our agency and will. (That he should reference Plato, Kant, and the soul in a discourse on projections and constructions of the fourth dimension as late as 1904 is quite remarkable.)

Back to Borges and the modern-ish day. If you tried visualising anything in the previous paragraphs, you’ll have found it difficult, and that’s because a hundred years on we still think in three dimensions. We cannot visualise the fourth, other then through its projections or, if you will, through the shadows it casts. Indeed, Borges says in his story, once his narrator has entered Red House:

I now recall a long, U-shaped piece of furniture like an operating table, very high, with circular openings at the extremes. It occurred to me that this might be the bed used by the resident of the house, whose monstrous anatomy was revealed obliquely by this object in much the way the anatomy of an animal, or a god, may be known by the shadow it casts.

This is an echo of Hinton, which anyone unfamiliar with Hinton’s book Fourth Dimension, would miss. Continuing in the same paragraph, Borges says that:

… there came to my lips the word amphisbæna, which suggested (though by no means fully captured) what my eyes would later see …

What is an amphisbæna? It is a snakelike creature of great poetic inspiration. It is there to suggest the freakish, the serpent, and the whole mythology built around these slitherers. It’s also the sole sentence with which Borges indicates that he has seen this monster now residing in the Red House and that he has survived to tell the tale. 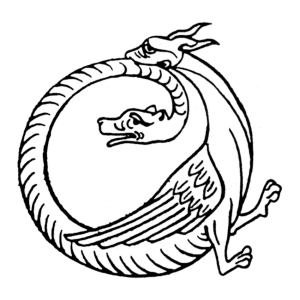 (My next post will be a sequel: I’ll discuss the structure of the story and one final, important reference to the impossible and the grotesque.)

N.B. This article is based on my own research using secondary sources such as Wikipedia, Hinton’s book, and Borges and His Fiction : A Guide to His Mind and Art by Gene H. Bell-Villada. Any conclusions (about Red House and in general), are my own. I welcome comments and corrections from any Borges aficionados.