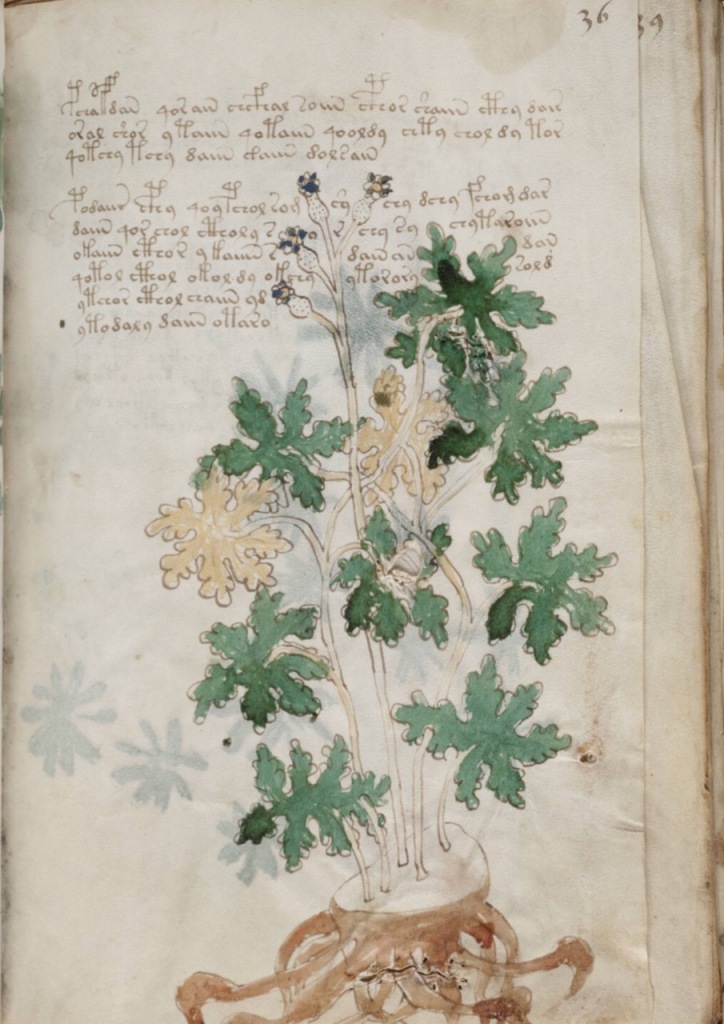 (Bök’s poetry collection Eunoia (2001) has five sections corresponding to the five vowels, and each is written using words that contain no other vowels than the selected one. For example, in the E section:

We sneer when we detect the clever scheme—the emergent repetend: the letter E. We jeer; we jest. We express resentment. We detest these depthless pretences—these present-tense verbs, expressed pell-mell. We prefer genteel speech, where sense redeems senselessness.

This is a type of lipogrammatic writing, where a constraint is placed on the available letters. Before Bök, there was Ernest Vincent Wright’s 1939 novel, Gadsby, which omits the letter e.)

In the examples above, choices and limitations are made for the sake of creative value, but none are necessary to engender an anomaly: the passage of time will suffice.

The Voynich Manuscript is a fifteenth century codex written in an undeciphered language. The Manuscript is bound in parchment and contains about about 300 vellum pages (some missing, some as foldouts), filled with aesthetically exquisite brown-ink calligraphy which heavily contrasts with amateurish red-blue-green illustrations. A conjectured pharmacopoeia, the book contains drawings of unidentified plants, of enigmatic astrological charts, and of women bathing together in tubs or interacting with bizarre organic structures. The Manuscript likely originates from Northern Italy but is named after the Polish book dealer, Wilfrid Voynich, who acquired it at the beginning of the twentieth century.

Curiosity is the starting point of many a book, including those that no one else has been able to understand. Not because you’re likely to succeed, but because it defies (insults?) the hubris of mankind as a scientific, culturally ever-progressive species. You may not be able to solve a Rubik’s cube, but the first time you’re confronted with it you’ll want to understand the difficulty, especially if, as is the case with the Voynich Manuscript, the cube remains unsolved.

If you’d like to attempt Voynichese for yourself, the whole Manuscript is available for free on archive.org. For detailed information about the language and the attempts made to understand it, see the Wikipedia page—it provides plenty of insight and references.

2 thoughts on “Reading on the Fringes: The Voynich Manuscript”