On reading the “Codex Seraphinianus” by Luigi Serafini.

If you’d like a bewildering encounter with an alien culture, read the Codex Seraphinianus by Luigi Serafini. It’s an encyclopaedia of an imaginary world written in a fully incomprehensible language and illustrated with detailed, coloured drawings that cover all areas of life: flora, fauna, science, manufacturing, alien (humanoid) anatomy, history and ethnography, dining and fashion, and architecture.

As the act of understanding words will be limited, here is a taster of visual delights that await you in the order that you’d encounter them (and including only the ones that can plausibly be put into a few words):

Bird with a second head where a tail would be, flower that rains on itself, flower that grows laddered stalks, flower that grows leaves shaped like scissors, fruit that bleeds, apple growing within an apple, grapes growing on a banana, walnuts growing out of a fennel, matchsticks growing in a beetroot, trees growing inside trees, trees jumping off a cliff and swimming away, trees that grow into the shape of a chair, flowers that blow up to become helium balloons.

Fish with a humanoid face, fish with own fish-bowl over its head, snake without head or tail (a loop), snake as shoelace, bird consisting of a head and a single feather, bird with three heads, chick that hatches out of an egg that is regurgitated by a chick hatching out of an egg that is…, bird with scorpion tail, horse with wheels for hind legs, hippopotamus with wires for a body, rhinoceros whose horn and tail are one continuous flesh-loop.

Skeleton bringing soup containing bones, people with wheels for feet and tools (hammer, pen, pistol) for hands, man with many faces (like a weathervane), people with mushrooms for heads, people being made by dressing a skeleton in skin.

Continents arranged in a circle, people collecting chicken droppings, a fountain where water and alligators spurt out together, letters made out of woolly threads, people eating letters, people wearing various facial mask, cities that turn into rainbows (continuous transition), cities connected by rainbow bridges, cities built inside prisms with their own weather systems, cities in labyrinths, cities on both sides of a ravine, public parks with house-sized pencils protruding from the lake.

(Many of these images can be seen by simply searching for the Codex on Google.)

To be clear, the Codex is a fictional work published in 1981. It was created purposefully as an enigma, a surrealist foray into the imagination, and is accepted and enjoyed as such. Serafini has even said that the language is asemic, or without meaning.

Now compare the Codex with the fifteenth century Voynich Manuscript (discussed last time), which has withstood all attempts at being deciphered. The plants from its pages remain unidentified, the charts look plausible but reveal little, and the bathing women, well, does anyone else see similarities with The Matrix? 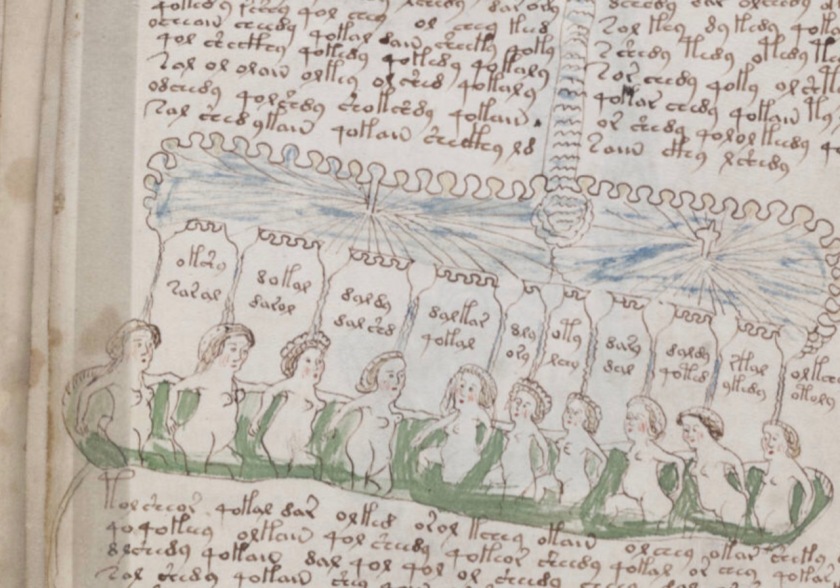 The centuries-long gap between the Manuscript’s creation and our interpretation attempts has perhaps swallowed some crucial metadata, such as the intention of the author. Like the Codex, the Manuscript could have been intended as an exhibition of human ingenuity at play. Perhaps we’ll never find out. Perhaps it shouldn’t matter whether we do.

5 thoughts on “Reading on the Fringes: Codex Seraphinianus”