Albert Camus on Kafka and the absurd, taken from “Myth of Sisyphus”.

Here, have some flash-fiction from seventy years ago.

You know the story of the crazy man who was fishing in a bathtub. A doctor with ideas as to psychiatric treatments asked him “if they were biting,” to which he received the harsh reply: “Of course not, you fool, since this is a bathtub.” That story belongs to the baroque type. But in it can be grasped quite clearly to what a degree the absurd effect is linked to an excess of logic. Kafka’s world is in truth an indescribable universe in which man allows himself the tormenting luxury of fishing in a bathtub, knowing that nothing will come of it.

—Albert Camus on Kafka, The Myth of Sisyphus and Other Essays (Translated from the French by Justin O’Brien)

The bathtub story starts from an absurd proposition (fishing in bathtub).

The doctor assumes the patient has taken seriously the first part of the proposition (fishing), so proceeds to play along by asking whether the fishes are biting.

The patient, however, latches onto the second part of the proposition (bathtub) and is insulted by the doctor’s lack of intelligence.

The logic of both participants isn’t at fault, though the disjunction stemming from the initial absurdity is. At a basic level this paradoxical repartee is easily inserted into the core of any incident. Somehow it doesn’t fail to perplex every time.

Even though I just wrote those three examples, holding their meaning in my head makes me spin like Kafka’s top.

END_OF_DOCUMENT_TOKEN_TO_BE_REPLACED

On paralipsis, the ironic process, and the combination of both in “Never Imagine” from Henri Michaux’s “Life in the Folds”.

Most likely, yes. Brains like to disobey negative orders: don’t think about that stressful meeting tomorrow (you will), don’t worry about that mosquito bite (it’ll prompt start itching), don’t ruminate on all the goals you have failed to achieve recently (a list will promptly appear).

The inability to deliberately shake off a thought through negative command is called Dostoyevski’s white bear problem or the ironic process.

Writing can harness this process to magnify the impressions left by (disconcerting) images. This is another reason why word associations are hard to dispel; in Dangerous Associations the pairing of baby and knife was disturbing because the mind connected the two words via cutting, but also because the image stuck and telling yourself not to think about applying knife to baby may have lead to a mental deepening of the scenario rather than its dispersion.

(When faced with gloom, it’s worth trying to direct the ironic process towards a positive purpose by trying really hard not to think about, for example, cuddly white teddybears.)

Like with other unbalancing acts, the more stressed you are the more distress persistent, unshakable negative thoughts can cause you. Which is why reading emotionally challenging books during a difficult period at work, for example, can affect you more than reading them during your vacation. END_OF_DOCUMENT_TOKEN_TO_BE_REPLACED

How Anne Carson employs examples of Time to describe other human afflictions in “Red Doc>”. 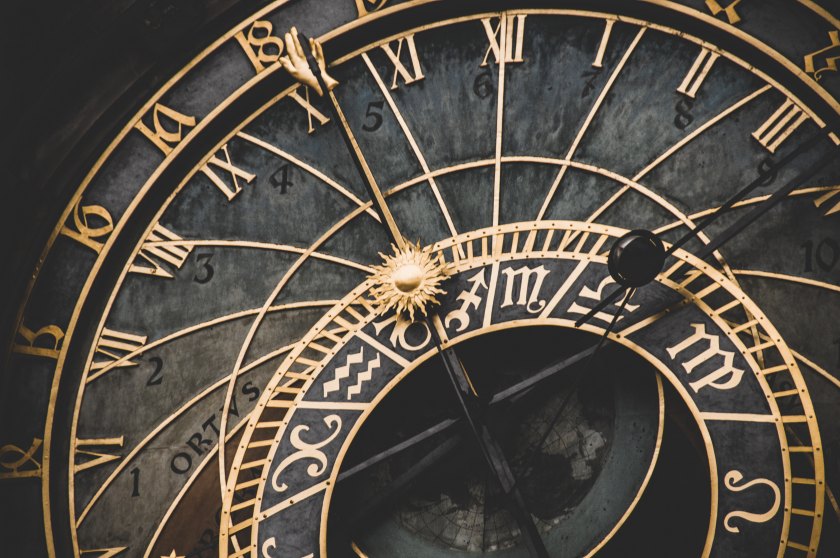 Time is a lot of things. It’s precious, it’s money, it’s irreversible. It measures change and is defined by change. And, as I was proud of deducing early on (when I still thought of the world as consisting of either-or pieces), time is easy to measure: you’ve got an eternity ahead of you, until you have not a moment more.

Now here’s how Anne Carson thinks about Time at the beginning of a chapter in her verse-novel Red Doc>.  (I discuss the book’s unusual structure in my previous post, The Not-So-Mild Hallucinations of a Musk-Ox).

Quote:
Time passes time
does not pass. Time all
but passes. Time usually
passes. Time passing and
gazing. Time has no gaze.

Sense or senseless? Let’s see, Time by Time in the Quote:

But that’s just the beginning. This chapter is fifty-one lines long, and she goes on to give another twenty-four instances of Time, most of which follow this pattern of starting a sentence with the same word—an example of the figure of speech called anaphora.

What makes the chapter special beyond the hammering of a repetitive element, however, is how Carson employs examples of Time to describe other human afflictions.

I’ve chosen to showcase some of her best ones (I quote her lines verbatim in italics, but I’ve left out the formatting). My interpretation is in square brackets.

END_OF_DOCUMENT_TOKEN_TO_BE_REPLACED

Where the metaphorical seas lap the literal sands of language, idioms are born. Some of them are then picked up, like pebbles, to be tossed around, transmitting meaning and merriment. Some get dropped, others get so smoothed out by time, tongues, and tortuous trajectories, that they’re labeled clichés.

Does that mean that a cliché is linguistically dead in the water and beyond the pale? That everyone is sick and tired of it? That you run the risk of boring someone stiff if you use it? Not necessarily. There are ways and means. Let’s see a demonstration (emphasis is mine).

Quote: Stories without [an implicit framework] go unread; stories with it are capable of knocking the socks off someone who’s barefoot.

This is from Lisa Cron’s Wired for Story: The Writer’s Guide to Using Brain Science to Hook Readers from the Very First Sentence. Her implicit framework is what Jorge Luis Borges called algebra in his observation that art is fire plus algebra. (How she interprets this algebra-framework is the essence of her book.)

Cute turn of a turn of phrase.

END_OF_DOCUMENT_TOKEN_TO_BE_REPLACED

“Tell me about yourself, Mr. Marlowe. I suppose I have a right to ask?”

“Sure, but there’s very little to tell. I’m thirty-three years old, went to college once and can still speak English if there’s any demand for it. There isn’t much in my trade. I worked for Mr. Wilde, the District Attorney, as an investigator once. His chief investigator, a man named Bernie Ohls, called me and told me you wanted to see me. I’m unmarried because I don’t like policemen’s wives.”

It’s humour this week, and today I’m featuring one last Quote from Raymond Chandler’s The Big Sleep (for a while, at least).

If you read my previous post, Stained-Glass Romance, or indeed any of last week’s posts about Marlowe’s adventures, you’ll have a context for the Quote, and it’ll mean something if I say the client speaking is General Sternwood, whose front door accommodates Indian elephants and whose stained-glass windows feature clumsy, sociable knights attempting to untie scantily clad damsels bound to trees.

If you don’t have the context, you need none.

END_OF_DOCUMENT_TOKEN_TO_BE_REPLACED

New York, September 1887. Twenty-three-year-old journalist, Nellie Bly (real name: Elizabeth Cochran Seaman) has agreed to go undercover in Blackwell’s Island Insane Asylum and write a report about her experiences for the New York World. After her employers promise that they will somehow get her out, she is left to find a way in. At the time, to be sent to an asylum, a judge had to declare you insane, after two physicians agreed you were of unsound mind. Nellie fears she cannot fool them.

It proves to be easier than she thought.

Here is an excerpt from her report Ten Days in a Mad-House (my emphasis).

Quote: But here let me say one thing: From the moment I entered the insane ward on the Island, I made no attempt to keep up the assumed role of insanity. I talked and acted just as I do in ordinary life. Yet strange to say, the more sanely I talked and acted the crazier I was thought to be by all except one physician, whose kindness and gentle ways I shall not soon forget.

Just to be clear: this is non-fiction.

Fear of the paradox.

END_OF_DOCUMENT_TOKEN_TO_BE_REPLACED

You don’t have to write literary fiction to justify using figures of speech. Metaphor and oxymoron in China Miéville’s short story.

Quote: The disappearing body quickly became shorthand. Anything lost was considered pocketed by our ambulatory corpse on its way home. Unexpected noises in the corridors were the incompetent creeping of the revenant.

This is China Miéville’s disappearing body from The Design, published in his collection of short stories Three Moments of an Explosion. A body has disappeared from the dissection room where medical students study anatomy, and we are hearing about the atmosphere that developed thereafter. A morbid setting, but these are students of medicine, who have learned, perforce, to joke about their environment.

END_OF_DOCUMENT_TOKEN_TO_BE_REPLACED

Paradox, epanalepsis, and assonance in Joseph Heller’s quote about flies in eyes.

The Quote appears one page after Joseph Heller explains the (in)famous catch in his novel Catch-22.

It reminds me of this (presumably) rather more famous quote from the King James Bible.

Thou hypocrite, first cast out the beam out of thine own eye; and then shalt thou see clearly to cast out the mote out of thy brother’s eye. (Matthew 7:5)

(That was a rhetorical question!)

END_OF_DOCUMENT_TOKEN_TO_BE_REPLACED

Ross MacDonald on what it feels like to be a thief and why his quote works.

In Find a Victim (1954) by Ross Macdonald, we hear this thought of the main character, private detective Lew Archer as he is witnessing an interrogation of a thief. He tells us his own experience in two well-crafted sentences of parallel structure.