A form of speech artfully varied from common usage.

See the Books page for other useful references.

Giving names to distinguishable features of style will not in and of itself bring about inspiration, or authenticity, or eloquence, or even mere competence. These are names, not incantations. The names will, however, allow us to juxtapose various effective passages which bear interesting resemblances one with another. From these juxtapositions, we can gain an actual sense why these passages are effective and how ours might be made more so.

— Figures of Speech: 60 Ways to Turn a Phrase, Arthur Quinn

Figure vs Figure of Speech

It may be a bit of both, however, it also looks like figure — meaning tricks of the rhetorical and linguistic trade — was used in that sense first, and that the expression a figure of speech came later. This is what some internet-and-book hopping has thrown up.

First, the linguistics approach: a quick jaunt to the  OED Online.

The word figure has many meanings. The particular sense used in figure of speech is found under number 21, in section V, of the entry for figure, n.

a. Any of the various ‘forms’ of expression, deviating from the normal arrangement or use of words, which are adopted in order to give beauty, variety, or force to a composition; e.g. Aposiopesis, Hyperbole, Metaphor, etc. Also, figure of speech.

Indeed, searching for figure of speech redirects to this entry.

The Greek word σχῆμα refers to form or figure. The earliest of the examples given in the OED under 21.a comes from Chaucer.

Second, the rhetorics approach: a quick jaunt to the A Handbook of Rhetorical Terms by Richard A. Lanham.

The term figure in its most general meaning refers to any device or pattern of language in which meaning is enhanced or changed. The term has two subcategories:

Trope: use of a word to mean something other than its ordinary meaning — a Metaphor, for example.

Scheme: a figure in which words preserve their literal meaning, but are placed in a significant arrangement of some kind.

2. Figure of thought: a large-scale trope or scheme, or a combination of both — Allegory, for example.

The above definition peels back the simplicity of the word figure and gives us a glimpse of its roots. The difference between figure of words and figure of thought is scale: the former lives on sentence level, the latter encompasses a whole paragraph, essay, or novel. Would you call both figures of speech?

Third, linguistics and rhetorics come together?

A term that appears in conjunction with figure of speech is rhetorical figure. For example, Wikipedia equates the two, citing an 1843 edition of the book A Grammar of the English Language by Emanuel Del Mar, that starts the chapter titled Of Rhetorical Figures with the following sentence:

A rhetorical figure, or a figure of speech, is a peculiar expression of a sentiment different form the ordinary way.

Perhaps when you say figure you’ve got both covered? The 1857 Marcersburg Review, Volume 9 explains how it will use the term figure of speech:

The term figure of speech we shall use in a generic sense, reserving the words metaphor and trope to denote particular classes of figures.

Conclusion: Taking what I have seen from my own research, and what Wikipedia says (Wikipedia, being a sort of proxy for today’s public opinion), I would judge that the figure of speech is most frequently used as a general term to denote the figures of words discussed above, and is often said to include this or that concrete, Greek-named figure.

I couldn’t resist having a stab at the Ngram Viewer.

The Ngram Viewer searches for a particular word or phrase that you give it — for example if the phrase has two words it’s a bigram — and produces a graph showing the frequency of this bigram in a corpus of books over a period of years. You can give it complex search parameters and tell it which corpus to search.

I searched for figure of speech across the whole English corpus, between years 1500 and 2000. (You cannot search earlier than 1500.) 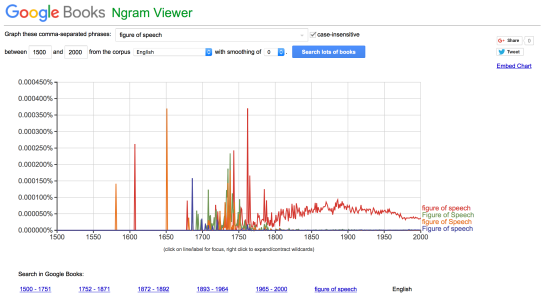 We know Chaucer used figure in the 1380s; I couldn’t locate the reference from 1581, which represents the earliest spike on the figure of speech graph, to see whether it proudly claimed to be the first. This proves little, but indicates likelihood that figure predates figure of speech (if not rhetorical figure).

When interpreting this graph, bear in mind that the y-axis shows how often figure of speech occurred within all the trigrams in all the books that were published that year in English. That can’t have been that many in 1581; Shakespeare would have been only seventeen.

P.S. The question that prompted this page was kindly submitted by my husband, who thought I was trying to be cute in calling figures of speech just figures.

Note: To any professional linguists or others who know better: Do you disagree? Is there something I missed? Do you have a good reference I can add? Please let me know. I’m always looking to improve QQ content.