On Oliver Sacks’s arguments in his essay “The Lost Virtues of the Asylum”. 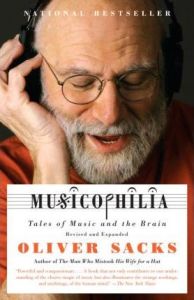 I associate neurologist and author Oliver Sacks with serene-laughter. Don’t ask me to define the term. The best I can say is: look at the image of him that appears on the cover of his book Musicophilia.

I read his book The Man Who Mistook His Wife for a Hat a long time ago, so I do not remember whether he employed magnificent figures of speech, or merely decent ones. But I do remember that his case-studies were not oppressive, despite the seriousness of the conditions he described. The New York Times called him the poet laureate of medicine for a reason.

After two heavy books, Kesey’s One Flew Over the Cuckoo’s Nest and Bly’s Ten Days in a Mad-House, I decided to find a fresh, uplifting voice on a similar topic. I settled for Asylum : Inside the Closed World of State Mental Hospitals, by photographer and architect Christopher Payne, and with an introduction by—you guessed it!—Oliver Sacks. It was published as an essay in the New York Review of Books, under the title The Lost Virtues of the Asylum.

You see where the title is going.

Ideally, I would quote the introductory paragraphs here, then dissect their arguments below, but the post would become too cumbersome. Instead, I urge you to read the first few paragraphs of the NYR page  to feel the power of his argument, before having me ruin its effect.